Stories from the field

How participatory maps can inform national policy making: The Tampakan Copper-Gold mine case

On September 23, 2011, Sagittarius Mines, Inc., a joint venture between global giant Glencore, Australia's Indophil Resources, and Filipino firm Tampakan Group of Companies, organised a public consultation in Koronadal City, South Cotabato, Philippines, to present the results of a series of feasibility studies including the results of an Environmental Impact Assessment (EIA) and inherent “safety, merits and sustainability” of the planned US$5.8-billion Tampakan Copper-Gold mining Project.

The final overall mine area was estimated at around 10,000 ha located within the boundaries of four provinces, namely South Cotabato, Sarangani, Davao del Sur and Sultan Kudarat, mostly forested and including a substantial portion in the Indigenous peoples’ ancestral domains. The open pit of 500 has would have been dug to a depth of 785 meters while the topsoil stockpile and pit ore stockpile would have covered areas of 5 ha and 49 ha, respectively. The company’s EIA estimated that 5,000 people, mostly of indigenous origin, were to be directly affected, and would have required re-settlement. The mining project would have had direct impact on five watersheds, around 4,000 hectares of old-growth forest and five indigenous peoples’ ancestral domains. 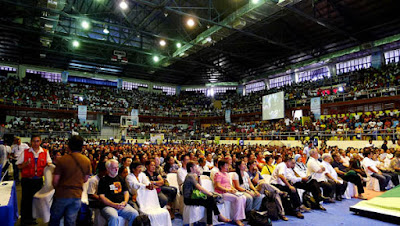 Consultants and executives of the company shared the finding of their studies using figures, charts and images all presenting the “expected benefits” of the proposed mining project, the largest of its kind in the Philippines and among the largest copper mines in the world to a an estimated 10,000 people crammed in the Koronadal City plaza.

At the other end of the spectrum, the Philippine Association for Intercultural Development (PAFID), a non-governmental organisation (NGO) supporting the cause of Indigenous Peoples and local minorities, prepared a geo-referenced and scaled relief map of the area, to translate the technical and complex information available on the reports produced by the company via a visual and tactile interface. Building on the data provided by the mining company itself (e.g., potential stockpiles of mine tailings and wastes), the physical 3D visualisation of the mining complex - once unveiled - would have shown a different, less rosy scenario.  In the early morning before the start of the public consultation, the 3D map was sneaked into the plaza covered with a cloth.

The company’s experts - who included British, Australian and Filipino mining executives, were the first to present the results of the feasibility studies, environmental impact assessments and more, under the flashlight of local and national media, radio and TV operators.

When given the floor to react to the presentations, PAFID representative, Ms Kail Zingapan, unveiled the Participatory 3D model (P3DM) to the surprise of the mining executives, the large audience crowding the plaza and the local media.

Benefiting from the same media coverage as the mining executives, Ms Zingapan illustrated the actual and future scenarios of the Koronadal Valley and the Tampakan watersheds, where the mining operations would have taken place.

“This is the people’s map. We did not invent this,” she told the audience after unveiling the relief model. “Residents of the area showed us where their lands are located and we just plotted them on the 3D map,” Zingapan said. “We showed them the potential impact of the mining activities on the landscape and they saw that the mine development area would have included their ancestral lands. It appears that not all of them were consulted or correctly informed about the impact of the operations and the risks involved.”

According to local accounts, the audience was struck as Ms Zingapan further elaborated using the 3D map as a visual reference. She pinpointed that the company planned to build its tailings dam on an area, which is considered as sacred by the indigenous peoples. The location is also the headwater of the Mal River, which is the source of fish, of fresh water for home use and for irrigating crops. “This is your land where you live and get your food and other daily needs. It is up to you now if you want to see this land wasted and taken away from you or not,” she told the people in their local language. Her spoken words and image were amplified and accessible to the entire audience via the sophisticated multimedia system installed by the mining company for the occasion.

The visualisation of the pre and post scenarios offered by the 3D map were graphic, easy to understand and powerful, and underpinned public arguments contesting the company’s plans to mine copper and gold through the open-pit method.

The consultation ended, South Cotabato Governor Arthur Pingoy declared that he was duty-bound to implement the Province’s 2010 environment code, which bans open-pit mining. The mining company contested the “constitutionality” of the Province’s environment code and insisted that open-pit mining is the “safest method.” In 2014 the case, presented by the Europe-Third World Center (CETIM), was debated 26th session of the UN Human Rights Council.

In 2016, Philippine Environment Secretary Regina Lopez stated that “There will be no Tampakan mine operations under my term.” “I will never ever allow this because it’s immoral. It’s socially unjust to allow companies to put the lives of all the farmers and indigenous people at risk,” Secretary Lopez said.

On 27 April 2017, Secretary Lopez further stated that she will ban open-pit mining in the country, toughening a months-long crackdown on the sector she blames for extensive environmental damage. Among others, the ban would halt the $5.9 billion (£4.59 billion) Tampakan copper-gold project, the nation's biggest stalled mining venture. Tampakan failed to take off after the province where it is located banned open-pit mining in 2010, prompting commodities giant Glencore Plc to quit the project in 2015.

In interfacing with the press, Secretary Lopez used the same P3DM used in 2011 by Ms Zingapan to astound the audience in Koronadal City, and kick-start a process with is likely to lead to fundamental changes in the policy governing open pit mining in the Philippines.